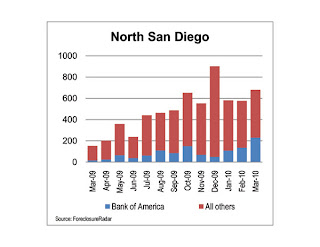 Bank of America, the nation's largest mortgage lender, ramped up its foreclosure activity in March, sending hundreds of letters warning delinquent borrowers in the region that it could sell their homes at auction in as little as three weeks, according to North County Times analysis of data from ForeclosureRadar.

The bank said the increased activity was a natural consequence of borrowers running out of options.

Analysts and real estate agents said the moves by the Charlotte, N.C., banking giant, which controls a large share of the Southern California mortgage market, could signal a final reckoning for homeowners who have been protected by government programs for months or even years.

Last month, a Bank of America division called ReconTrust N.A. sent out a flurry of "notices of auction," which alert owners of the date their homes could be sold in foreclosure proceedings.

The notices went to 230 homeowners in North San Diego County, a 69 percent increase from February, and to 391 owners in Southwest Riverside County, up 67 percent from February.

By comparison, in March 2009, ReconTrust sent a total of 31 such letters to both regions combined.

ReconTrust was formed as the foreclosure division of Countrywide Financial Services Inc., the company that helped drive the real estate boom of the 2000s with its no-documentation "liar loans" and enormous subprime portfolio.

As borrowers could no longer make payments on such loans, home values plummeted, dragging with them much of the national economy.

When Bank of America agreed to take over Countrywide in January 2008, Countrywide said it managed 9 million loans valued at $1.5 trillion.

The purchase made Bank of America the largest manager of home loans in the nation.

Richard Simon, a Bank of America spokesman, wrote in an e-mail that he couldn't speak to the sharp increase of notices in San Diego and Riverside counties, but that the bank has expected more foreclosure activity.

"We have reported recently that we anticipate a rise in foreclosure activity through the coming months as homeowners are unable to qualify for loan modifications, fall out of modification programs or go into delinquency due to the ongoing stress in the economy," he said.

Bank of America has permanently lowered monthly payments for 12,700 borrowers through the Treasury Department's Home Affordable Modification Program, more than any other lender.

But the program as a whole is widely deemed a failure, because just 17 percent of applicants nationally have managed to qualify and keep up their payments, according to the latest Treasury report.

Data showing that Bank of America borrowers were falling out of HAMP and into foreclosure in rising numbers didn't surprise analysts.

"'We've given them the chance, it hasn't worked, we need to move ahead' type of idea," Peters said.

Another analyst who tracks Bank of America, Shannon Stemm of investment bank Edward Jones, said the loans now being foreclosed are "older," meaning borrowers had plenty of time to try a modification, and the bank had to get the delinquent loans off their books.

"A lot of the bad loans we're seeing from a couple of quarters ago are getting to a place where (Bank of America) need to make a decision for what to do with that bad loan," she said.

Morningstar's Peters thought the bank might be taking advantage of a strengthening California housing market.

"It's going to be in part an assessment of the ability of the market to handle some more real-estate owned (foreclosed) properties," she said.

In San Diego County, the widely respected Standard & Poor's Case-Shiller Home Price Index in March showed home values rising at a 12.5 percent annual rate since hitting a bottom in May.

Riverside County also has begun to see a rise in the median home price, and real estate agents in both counties said they often get multiple offers on the lowest-priced homes.

Peters also noted that moving more foreclosed properties into the market in spring and summer, the traditional buying season, made a lot more sense than foreclosing in November.

But there will be a little more delay before these properties reach the market.

After a notice of auction is sent, state law requires lenders to provide public notice in a newspaper three weeks before the property is sold.

That explains why locally, foreclosures haven't suddenly jumped: Notices of auction sales in March were down 74 percent in North County and down 64 percent in Southwest Riverside County, compared with the same month in 2009.

Such notices go to borrowers who typically are unlikely to suddenly get caught up on their payments.

A notice of auction is the second warning of impending foreclosure, sent three months after a notice of default, which is customarily sent after borrowers have missed three payments.

A surge in available listings could give a lift to real estate agents, who have complained about frustrated buyers amid tight supplies of homes for sale.

"My Bank of America asset manager told me we'd really start to get hit with inventory in mid-May to June," said Teri Garcia, a real estate agent based in Escondido who sells Bank of America foreclosures.

"If they're sending notices of auction in March, that about fits," she said.

Garcia said the local supply of foreclosed homes has been low all through the winter. She was thrilled to hear that more homes might be coming onto the market this summer.

"Let's get them on the market, get them sold, and get through all this," she said.

Promote Your Page Too